The 30-th edition Balkan Masters Athletics Championships will be held in Korce, Albania during 17-19 of September 2021. All masters athletes from The Balkans and abroad are welcome.

See you in Korce!

One week-end before the Madrid European Championships the Balkan family of masters got reunited in the Serbian capital city Belgrade for the 3rd edition of indoor championships in the history of the Balkan association. Recent years have shown that meeting once a year in autumn as started in 1991 is rather too little for the eagerness of the old rivals and friends in athletics from the Balkan region to get together and compete against each other.

Thanked to the organizing efforts of the Serbian Athletics Federation, the modern hall inaugurated in 2016 on the occasion of the EA indoor championships hosted 450 athletes from nine countries for more than 700 starts. The high quality of the organization and the venue paid with many Balkan and/or national records being beaten at the end of two days of competition. Most outstanding is the new world indoor record in shot put W65 category. With 12.94m the Romanian Mihaela Loghin confirmed her best ever outdoor of 13.08m set last summer in Aarhus.

The overall medals ranking saw the ever devotees of athletics from Greece taking 1st place with 42 gold and 101 medals in total. Serbia and Slovenia got 2nd and, respectively, 3rd position. The full results can be seen on www.bamaci2018.rs.

During the opening ceremony Marko Božicek and Marjetta Ćad, both from Slovenia, received the BAMA awards for the 2017 best veteran athlete.

It’s really been a great success for all attending parties. Many thanks again to the LOC, particularly to our hosts Predrag Momirović and Duska Mandić Lorbek and, last but not least, to the BAMA technical delegate Ivan Pukšar.

The BAMA athletes will meet again in September in Celje, Slovenia, for the 27th edition of the outdoor championships (www.bamacs2018.com not to be missed). Records in jeopardy again! 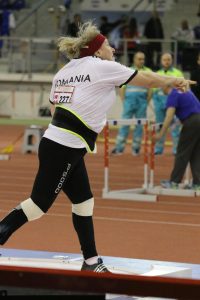 We proudly present the trophies for the Best Balkan Masters Athletes. The name of the two best athletes (feminine and masculine) will be revealed during a festive ceremony in Belgrade during BAMACi 2018. 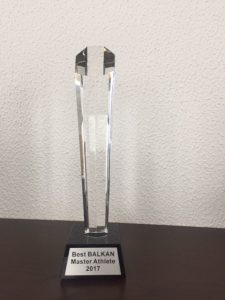 Today 20-st of January 2018 the official site of Balkan Masters Athletics was launched.

Have many nice visits!